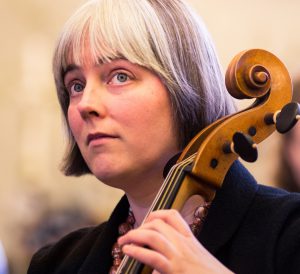 Elske Tinbergen studied cello with Ran Varon and baroque cello with Viola de Hoog, Jaap ter Linden and Lucia Swarts. During her master studies at the Royal Conservatory in The Hague, she specialized in playing the 5-string violoncello piccolo. She also took master classes with Anner Bijlsma.

Elske is co-founder of the baroque ensemble Giardino Musicale, a versatile chamber music ensemble. She also played many concerts with  harpsichordist Jörn Boysen. In 2012 they recorded a CD of Dutch baroque music with solo cello sonatas by Willem de Fesch (1687-1761) and Alexis Magito (1711-1773).

Over the years she has played in baroque orchestras at home and abroad: the European Union Baroque Orchestra, Musiciens du Louvre, Musica Poetica and The Northern Consort. As a member of Ensemble L’Esprit Musical Elske was prize winner at the International Van Wassenaer Competition.

The press describes her playing as: “intriguing” and “very strong”. The Dutch composer Daan Manneke (1939) described her rendition of his Tombeau pour Ton de Leeuw as “enchanting” (2015).

Elske is passionate about teaching, both modern cello and baroque cello. She regularly gives courses in ensemble playing and baroque interpretation for the Dutch ‘Vereniging Huismuziek’. Elske is conductor and artistic director of the amateur cello ensemble Spiccato, once of the ensembles of Huismuziek Amersfoort. She is also asked to act as a coach for other ensembles.

In June 2018 Elske defended her thesis The “cello” in the Low Countries; the instrument and its practical use in the 17th and 18th centuries at Leiden University.

In 2021 she founded  Tinbergen ‘Cello Editions, a small publishing house which concentrates on music editions for one or more cellos.